Events that inspired me to do science

I was listening to a telecon today about education and public outreach options for NASA missions and the planetary science community, and I couldn't help but think about the events in my life that led me to pursue science.

1. An ice cave, a meteor show, and a lunar eclipse
My father and I were traveling in Montana one summer, intrepidly braving backwoods jeep roads in a Volkswagen Rabbit, when we happened upon a tiny little sign pointing to an ice cave. Having been in and out of caves since I was little, this got me really excited. (Although perhaps being in and out of caves also inspired me in general). Entering the cave was like walking into another world. Coming from the hot Montana summer, the icy cavern floor was shocking. The best part, however, was in a little room off the main entrance. This room was one big geode. Calcite crystals covered the floor, ceiling, and walls! I was in heaven. The crystals weren't particularly pretty, covered by a film of tan accretions, but some had been dug out of the floor anyway. I confess that I took a few myself, although I'm pretty sure I only took already detached ones.
When Dad was finally able to pry me out of the cave, we found a camping spot on a high bluff overlooking the lights of Billings (?). Because it was warm and clear, we didn't pitch a tent that night. So when the moon rose, blood red and huge, in the sky, I was fully entranced. Then when meteors began streaking across the sky, my young brain practically exploded. I watched the brilliant white begin to creep across the moon again for as long as I could stay awake. No wonder I still love this stuff.

2. The Challenger disaster
I was in 7th grade, and we watched the launch live on NASA TV in our classroom. I remember the stunned silence, and the shocked look on the teacher's face. Somehow, that made me more interested in science, although I definitely didn't want to be an astronaut.

3. Holding a piece of Mars
During undergrad, I took a summer internship at the Carnegie Institute of Washington Geophysical Lab in DC. At the time, I was a die hard geologist, although I hadn't found my niche. So it was a bit of a surprise to me when I was first handed a thin section of a Martian meteorite. We took a tour of it on the electron microprobe, my first experience with the fuzzy black and white images capable of huge magnification (not exactly magnification, it's more of a reaction between electrons and atoms, but close enough). I didn't really get what I was doing until I looked up at the sky a few nights later and saw reddish Mars. Then it hit me, the tiny little piece of rock I was holding *came from up there*. It was actually a piece of another planet! I was hooked.

4. Making nylon
Although this one isn't specifically planetary or geology related, it sticks in my mind. One of my first (or it may have been my first) summer programs, I went to Clemson. Other than the bright orange paw prints everywhere, one particular lab stands out in my memory - the day we made nylon. It was the strangest thing. We mixed all kinds of chemicals in mini boiling cauldrons, and eventually got this pinkish, thick goo. You dipped a wire hook in and you could draw out a thin strand of nylon that just kept going and going. Wrapping it around a pencil, I probably could have emptied the entire pot in one go if I had been careful enough. It felt like rubbery yarn, and the tactile memory of it is still with me. Very odd, but I think that experience was somehow important to me.

On the other hand, something that did NOT inspire me scientifically was having to collect bugs, kill them with nail polish remover, and stick them with pins to a sheet of cardboard. I think the only things I learned were that I really didn't like killing things, and when you stick a pin in a dried millipede, it disintegrates and you don't get full credit.
Posted by Abby at 5:35 PM No comments: 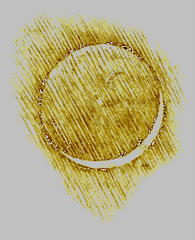